In this day and age it is widely known that we live in world where our resources are limited. Civilization is coming together, however, to try and utilize all the resources Earth has to offer in the most conservative possible way.

Wind, for example, is an abundant source of energy that is the largest source of annual generating capacity ahead of both solar power and fossil fuels. That is why Wind Turbines have been expanding more and more as we need to harness all the green energy we humanly can.

Wind Turbines are not only cost effective and release no damaging chemicals into the air but they also require no water (an increasingly scarce resource) unlike gas and coal-powered energy.

The list of beneficial attributes related to wind turbines goes on and on. Unfortunately, there are several drawbacks affiliated with wind turbines and the killing of birds is sadly one of them.

Wind Turbines killing birds involuntarily has prompted mass amounts of concern in the scientific community as generating clean energy and sustaining all life are two main priorities. It are these reasons that have led to many brilliant minds brainstorming to develop solutions to the unpleasant reality. 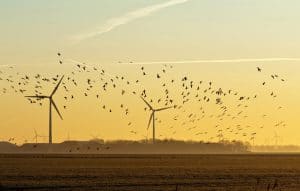 As wind turbines are the most threatening as well as quickest expanding form of green energy, it’s no surprise that environmental scientists and engineers are constructing ideas and working together to try and solve this massive dilemma.

There have been several ingenious breakthroughs towards trying to slow-down the rapid killing of birds. Whether or not they’ll actually work is the question.

How Wind Farms Are Trying To Stop The Slaughter

The preeminent way to reduce the rate of wind turbines killing birds is to effectively scout and pick better sites for wind farms. Eagles, for example, are drawn to locations with high wind currents as they enjoy soaring over open areas that are ideal for wind energy development.

The wind energy industry has been cooperating with federal wildlife officials by adhering to stricter policies revolving around the locations of wind farms for birdlife conservation, specifically golden eagle habitats for example. Avoiding known flight paths and migration routes would be a practical start. 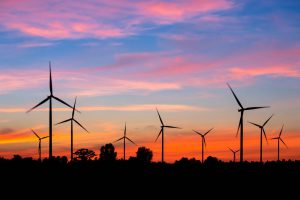 BBC says that, according to scientists, “turbines, most commonly painted white or grey, draw in insects. These then lure bats and birds – as they pursue their prey – into the path of the turbine blades.”

To counteract this issue, it has been hypothesized that painting the blades brighter more vibrant colors (ie: purple) the insects wouldn’t be attracted to the muted tones of the turbines translating to a lower collision of birds chasing their dinner. 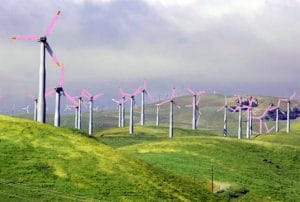 Fight science with science. That’s the idea behind utilizing gps tracking and radar sensors to alert wind turbine companies when birds are approaching their farms.

The endangered California Condor, who have only about 230 free-flying birds roaming California, are all tagged with GPS sensors.

When a condor approaches one of Terra-Gen’s farms, the turbines are alerted and automatically cease motion all within a period of two minutes. 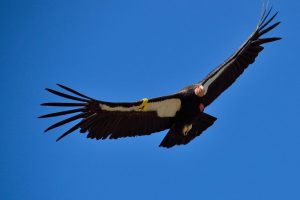 Engineers & Inventors have been designing new wind turbine models that  in theory, would not only be more aesthetically pleasing but would also benefit the goal of reducing the detrimental threat that the energy-generating machines pose.

These models vary in shapes and sizes. From turbines that rotate on a vertical axis (creating less chances of impact) to turbines enclosed in a large structure creating more visibility from the birds point of view. 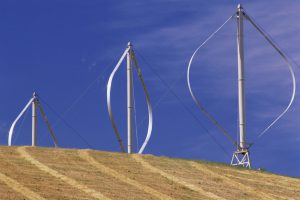 Let There Be Light

Simple enough of an idea.

The National Science Foundation presented a $150,000 grant for scientists being able to provide protection from wind turbines for birds and bats Using Ultraviolet Light Emitting Diodes as they believe the bright lights would discourage birds from flying in their direction.

There are numerous schools who offer programs that focus on the severity of generating green energy and how it’s production impacts the environment. Top Ranked School, Everglades University offers a degree program in Environmental Policy and Management that would be ideal for anyone who is passionate about the conservation of all life.