Each and every day that passes we face more and more of a threat from the current state our of world’s climate.

Too many people have a cavalier attitude towards climate change, too many absurdly don’t believe in it or too many simply don’t care.

Whatever it may be, things need to change.

Renewable energy is in motion to be the change

The main challenge is not only informing the public about the dire need to break away from our reliance on fossil fuels but also finding a solution strategy and successfully executing it.

Our planet’s only hope of survival is contingent towards utilizing renewable resources and this mission is attracting waves of attention for all the right reasons.

Renewable Energy is comprised of various forms of sources including Solar Power, Wind Energy, Hydropower, Biofuel, Geothermal and more. It is a clean source of energy that stems from natural sources and the popularity has been steadily increasing with time.

The popularity is breathing life into programs that, without, would ultimately leave Earth doomed.

Not many people are fully aware of the amazing benefits of renewable energy so the purpose of this post is to shine more light on facts about renewable energy with some statistics and highlights. 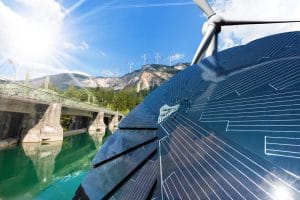 Since 1997, the United Nations has been working on increasing the adoption of renewable energy.

The goal was for it to become a 12% of the total energy consumption of the entire Union by the year 2010.

Member States were required to create and submit action plans regarding their will and actions to increase their renewable energy usage.

Today, different Member States have increased their consumption of renewable energy: Germany’s net generated electricity from renewable sources went up to 33.9% in 2016.

Italy’s consumption of renewable energy in 2014 covered 16.2% of the total energy usage in the country that year.

That same year, 78% of all the electricity consumption in Portugal came from renewable sources.

More countries are joining the cause and increasing their renewable energy usage, for example,  Ireland, Denmark, and Britain are all expected to get 40% of their energy from renewable energy sources by 2025.

China is leading in wind power

China, who built 2 windmills a day in 2014, leads the world in utilizing Wind Power by a long shot with the United States coming in a distant second.

China, who built 2 windmills a day in 2014, leads the world in utilizing Wind Power.

With its vast coastline, China has unlimited Wind Power resources and it is using this benefit to its advantage.

Despite the relevant issues that come with the fact that areas with great power potential, such as Gansu, are extremely far away from industrial centers, which has evolved in an underutilization of Wind Power, China is still, by far, the number one country in the word that utilizes wind as a source of energy.

Solar power getting to the masses

Solar Power, whose prices continue to drop as technology advances, is expected to double in global demand through 2022.

By 2050, Solar Power will likely be the world’s main source of energy, since it is predicted that it will supply 27% of global electricity.

For a long time, Europe was the only region to utilize Solar Power as one of its sources of electricity, however, throughout the years, other countries have also develop the use of Solar power, such as India, Israel, Canada, Japan, China, Australia, Mexico, South Africa, South Korea, Thailand, among others.

The Rockefeller family, who made their money in oil (fossil fuels), has began to sell their investments in oil and started to move towards clean energy.

A number of powerful businessmen are working and investing in renewable energy, here are some of the ones that have truly joined the cause:

Michael Bloomberg, the 7th richest person in the United States, donated $30 million dollars supporting Sierra Club’s goal of eliminating half of coal plants in the country by the year 2017.

Elon Musk, co-founder and CEO of Tesla who, as most of us know, manufactures full electric cars and energy storage systems, is working on the production of solar roofs to the mass market.

Aloys Wobben, who holds a 100% stake in Enercon, a company that produces wind turbines, controls 50% of Germany’s wind market.

Interestingly enough, he does not conduct business with the United States because he will not supply wind turbines to a nation, “so that it can supply water to huge golf courses,” were his very words.

Richard Branson, who made his fortune through the different businesses of the “Virgin” brand, is a member of the Breakthrough Energy Coalition. This organization pressures rich countries to double their fundings for energy research.

In the year 2016, coal consumption fell like it had never done before.

This has been thanks to a rise in the use of Wind and Solar Powers and also due to China’s estrangement from the heavy industry.

Moreover, in the United States, coal usage dropped as much as nearly ten percent that same year.

China, on the other hand, which was responsible for 50% of the total coal burned worldwide per year, dropped its number by 1.6 percent in 2016.

Los Angeles residents who use Solar Panels would save upwards of $90,000 over a 20 year period.

Moreover, adding solar panels can help save around $100 a month in many states, which translates to $30,000 in twenty years.

On the other hand, and adding to the list of benefits, is the fact that it also helps increase your home value.

According to National Renewable Energy Laboratory (NREL) homes with solar panels sell 20% faster and for more money, than homes without this type energy source. 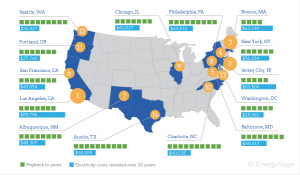 An important benefit that comes with the installation of solar panels, is its reliability.

One can calculate how much electricity will be generated for at least the next twenty year, and at what price, which makes it easier for the heads of the family to calculate their annual budget.

Solar Energy jobs are expanding 12x as fast as the US economy.

The Energy and Employment Report from the US Department of Energy states that the “solar industry now employs more people than coal, oil, and gas combined.”

According to Forbes magazine, tt is estimated that around 374,000 people were employed in the solar energy field in 2016.

First, let’s explain how a wind turbine works. It is basically the opposite of a fan.

While fans use electricity to turn and make wind, wind turbines use wind to make electricity.

Of course, wind turbines come in a wide variety of sizes, some are even as large as a football field, and as tall as a building that is 20 stories high.

A single wind turbine is able to generate power for 1,400 homes for a year, produce 230 million cups of coffee or run an average computer for over 2,000 years.

However, there are some environmental issues that come with the use of wind power.

Even though they have almost no impact on the environment if compared with fossil fuel energy sources, wind turbines produce noise that can be catalogued as sonic pollution and, moreover, it has killed numerous birds and bats that have flown into the blades.

Another issue with wind turbines is that, as it happens in China, the areas that can generate energy from this source are often far away from the cities that have the highest demand of electricity, which is why it is mostly used to power agricultural regions that need energy for farming purposes.

Funding is coming from the top

The World Bank is going to provide India with $100 million of funding towards enhancing their renewable energy program.

According to the World Bank numbers, 1.06 billion people do not have access to electricity and more than 3 billion still use fuels like wood, charcoal, coal, etc. for cooking and heating.

This is why, it is going to provide India with $100 million of funding towards enhancing their renewable energy program.

Also, since 2010, the World Bank has invested $21 billion in energy efficiency and renewable energy projects.

There is a massive goal that the world is aiming for in regards to being 100% reliant on natural resources for our energy.

Many major corporations have already implemented strategies that are geared towards achieving this immensely important task. 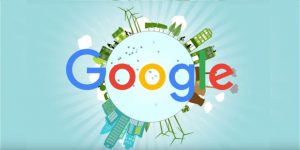 These facts about renewable energy not only provide insight on the unlimited potential natural resources have, but how advantageous they are to the planet itself, how they positively influence employment rate by creating millions of jobs and how it’s overall creating a better world.

Countries are coming together with one goal in mind, to sustain life by grasping all of what earth has to offer.

Whether that be through the advantages of wind energy, hydroelectric dams, or putting a solar panel on every roof, we’ll be able hopefully one day be completely reliant on natural resources.

Not only are industry leaders doing what they can by investing in renewable energy programs, universities are starting to seek out passionate individuals who hope to make a difference.

Everglades University offers a Bachelor in Renewable Energy Degree that focuses on:

This program is for those who understand the severity of the issue at hand and are determined to do what they can to help.

Our planet depends on the migration to renewable energy and we hope that someday soon, we get there. 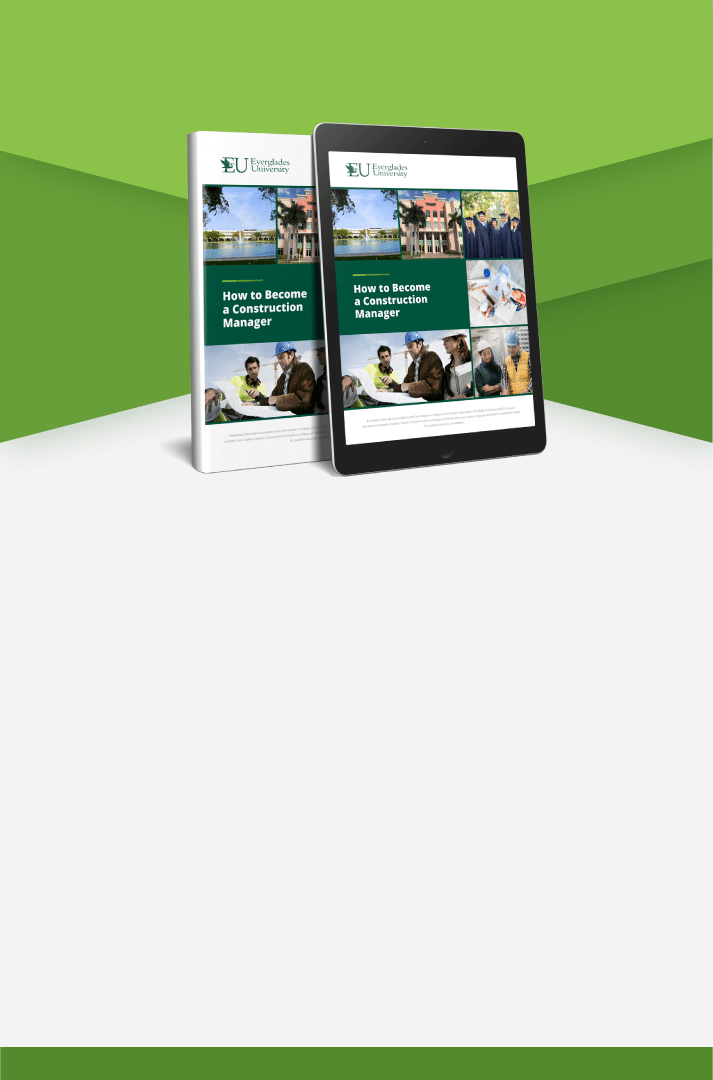